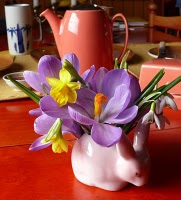 We’ve hiked in the mountain. We’ve sat in the sun with our café latte. Now it’s time for an Easter egg. The chocolate covered almond variety, or a solid egg of Norwegian chocolate, better than Swiss, better than Hershey, Norway’s best 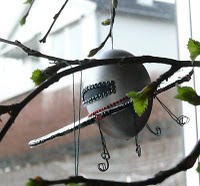 kept secret. Normally by this time of day we would have overdosed on chocolate, but this year there has been no egg hunt and thus no eggs. Neither was there mahjong or the breakfast buffet. For the first time in some twenty years there are no children in the house to hunt the eggs and play the mahjong. No children to place bunnies strategically throughout the living room on Easter Eve, marking the spots where the Easter Bunny should place the eggs. So the errant EB left all the chocolate hanging in a plastic bag on the back of my study door, of all places. Now I’ve found them, some of my marzipan favorites are there too, so we’re going to make a nice coffee and watch a film and have a taste of Easter.

This year we could have had an egg hunt outdoors, no snow for the first time in forever. We did go out and cut down willow and birch branches on which to hang the decorated eggs. The ones the girls and I decorated over the years are in the foyer window. Veronica’s artistic assortment is in a giant orange blown glass vase in the living room. This year she made several more, a few in the outer space theme: a UFO, sorry, UFEgg, and a solar system; as well as one sporting the word MEAT and covered with pictures of raw steaks and chops and other protein sources… ahem, and then the one she made for me. She asked me one day what was the most surprising thing that could come out of an egg. I dunno, a paper hat? I said. So today I got the egg, broken in a spiral with a small effigy of yours truly emerging from it, wearing a paper hat. Fabergé ain’t got nothing on this gal.